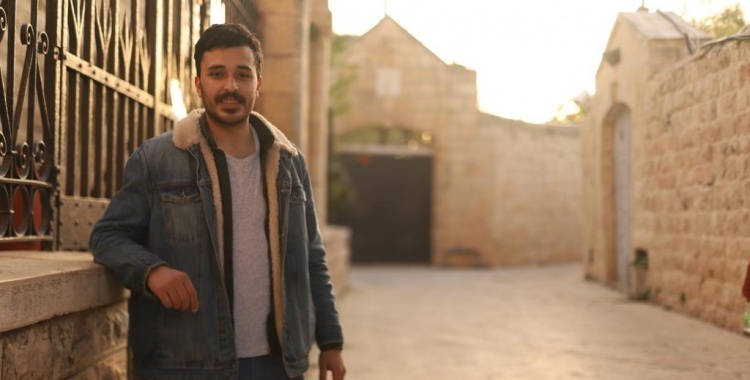 Based in Jerusalem’s old city, Hamzeh Al-Natsheh pursued a double major in history and archeology, two subjects he was passionate about since childhood. Soon after graduation  Hamzeh immediately began looking for work and secured a few short-term jobs. However, none of them were long-lasting due to the rise of COVID-19, which led to nation-wide lockdowns and a vicarious economic landscape.

In between jobs, Hamzeh put a more serious focus on his voluntary community outreach work, which allowed him to broaden his horizon by meeting new people and learning more about his local communities. As Hamzeh continued to delve into Palestinian history and explore his heritage, he realized that many people he interacted with lacked awareness about the cultural significance behind the style and motifs present in traditional Palestinian clothing.

History became the inspiration behind Menjal Couture, an apparel brand that heavily features the motifs, symbols, and textiles that have come to define folkloric Palestinian attire. The brand would showcase and market contemporary apparel items that bring traditional Palestinian fashion into the 21st century.

“In the heart of the ancient city of Jerusalem, MenjaI was created with the purpose of sharing the artistry and heritage of Palestinian generations past and present with the rest of the world,” says Hamzeh.

With such an ambitious project on his hands, Hamzeh knew he needed all the support he could get, which is why he joined MENACatalyst’s latest Jerusalem-based program, Empowering Youth Through Digital Skills Development, commissioned by the German Federal Ministry for Economic Cooperation and Development (BMZ) and implemented by the Deutsche Gesellschaft für Internationale Zusammenarbeit (GIZ) GmbH.

MENACatalyst’s virtual support program provided Hamzeh with a range of services designed to help him develop the skills and access the networks of support needed to launch Menjal Couture. Training sessions revolved around business and professional skills development, one-to-one and group mentorship with leading industry experts, and virtual networking with business enablers from Palestine and across the region. All apparel items can be purchased from Menjal Couture’s dedicated gallery as well as online, customers can also contact the shop’s founder to further customize specialty apparel pieces.

Through Menjal Couture, Hamzeh’s first goal is to support the Palestinian market. As such, all materials and embroidery designs are purchased via locally sourced vendors and handcrafters in order to support vulnerable social groups such as youth and women. The second goal is to support in-need university students which is why a portion of proceeds and profits are allocated to a special student fund.

“MENACatalyst believed in me and helped me lay the foundation for my project. What began as a simple idea on a piece of paper is now being developed into a fully-fledged business thanks to all the support I received through this program. I was able to learn more about the practical and operational aspects of starting a business and in the long-term what it takes to grow and reach new markets,” says, Hamzeh.